Russian President Vladimir Putin inspected the prospective warplane displayed with much fanfare at the MAKS-2021 International Aviation and Space Salon, which opened Tuesday in Zhukovsky, outside Moscow.

Russian aircraft maker Sukhoi developed the new fighter under the LTS program, a Russian acronym for the Light Tactical Aircraft.

Its makers said the prototype is set to make its maiden flight in 2023 and deliveries could start in 2026. They said the new design could be converted to an unpiloted version and a two-seat model.

The prospective warplane, marketed under the project name Checkmate, has one engine and is designed to be smaller and cheaper than Russia’s latest Su-57 two-engine stealth fighter, also built by Sukhoi. It can fly at a speed of 1.8-2 times the speed of sound, has a range of 3,000 kilometers (1,864 miles) and a payload of 7,400 kilograms (16,300 pounds), the jet’s makers said. 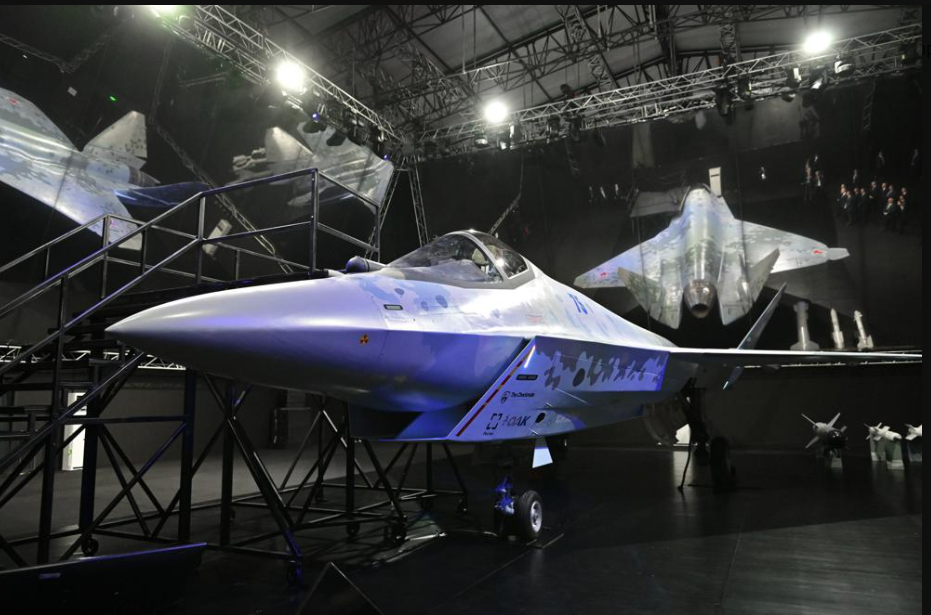 Russia’s Deputy Prime Minister Yuri Borisov voiced hope that the new fighter could be sold to India, Vietnam and African nations, adding that foreign customers are expected to order at least 300 such aircraft. Borisov noted that one foreign customer he didn’t name has already expressed a strong interest in the new jet.

The sales of warplanes have accounted for the bulk of Russian weapons exports, but the two-engine Su-30 and Su-35 fighters have faced growing competition in global markets.

Industries and Trade Minister Denis Manturov said that the prospective fighter was being developed to compete with the U.S. F-35 Lightning II fighter that entered service in 2015, a new Chinese fighter, and other designs. “We must join other nations that sell such aircraft,” he said.

Sergei Chemezov, the head of Rostec state corporation that includes Sukhoi and other aircraft makers, said the new plane is expected to cost $25-30 million. He said that the Russian air force is also expected to place an order for the new fighter.

Russia’s Sukhoi and MiG aircraft makers only have produced two-engine fighters since the 1980s. Some experts observed that it has placed Russia at disadvantage in some foreign markets where customers preferred cheaper one-engine aircraft.

Rostec said the new warplane belongs to the so-called fifth generation of fighter jets, a definition that assumes stealth characteristics and a capability to cruise at supersonic speed, among other advanced features.

The corporation noted that the new design includes artificial intelligence features to assist the pilot and other innovative technologies. It said the jet was designed to reduce service costs and to be easily adapted to varying customer needs.

Manturov noted that the new design would incorporate some components from the previous fighters to help reduce price.

Rostec ran an aggressive advertising campaign in the days before the air show, publishing a picture of the new fighter hidden under a black tarpaulin with “Wanna see me naked?” written under it. It also posted a video featuring adulatory customers from India, the United Arab Emirates, Argentina, Vietnam and other countries, reflecting export hopes.

Plane spotters flocked to Zhukovsky last week to take pictures of the new plane as it was being taxied to a parking spot across the giant airfield which has served as the country’s top military aircraft test facility since Cold War times.

The Kremlin has made modernization of the country’s arsenals a key priority amid tensions with the West that followed Moscow’s 2014 annexation of Ukraine’s Crimean Peninsula.

It also has strongly encouraged the development of new passenger jets to compete with planes built by American aircraft maker Boeing and Europe’s Airbus that currently account for the bulk of Russian carriers’ fleets.

Russia’s airliner programs have encountered delays amid Western sanctions that hampered imports of Western engines and other key components. But the country managed to produce a new engine for the new MS-21 passenger plane, which also was displayed at the show in Zhukovsky.

“What we saw in Zhukovsky today demonstrates that the Russian aviation has a big potential for development and our aircraft making industries continue to create new competitive aircraft designs,” Putin said in a speech at the show’s opening.